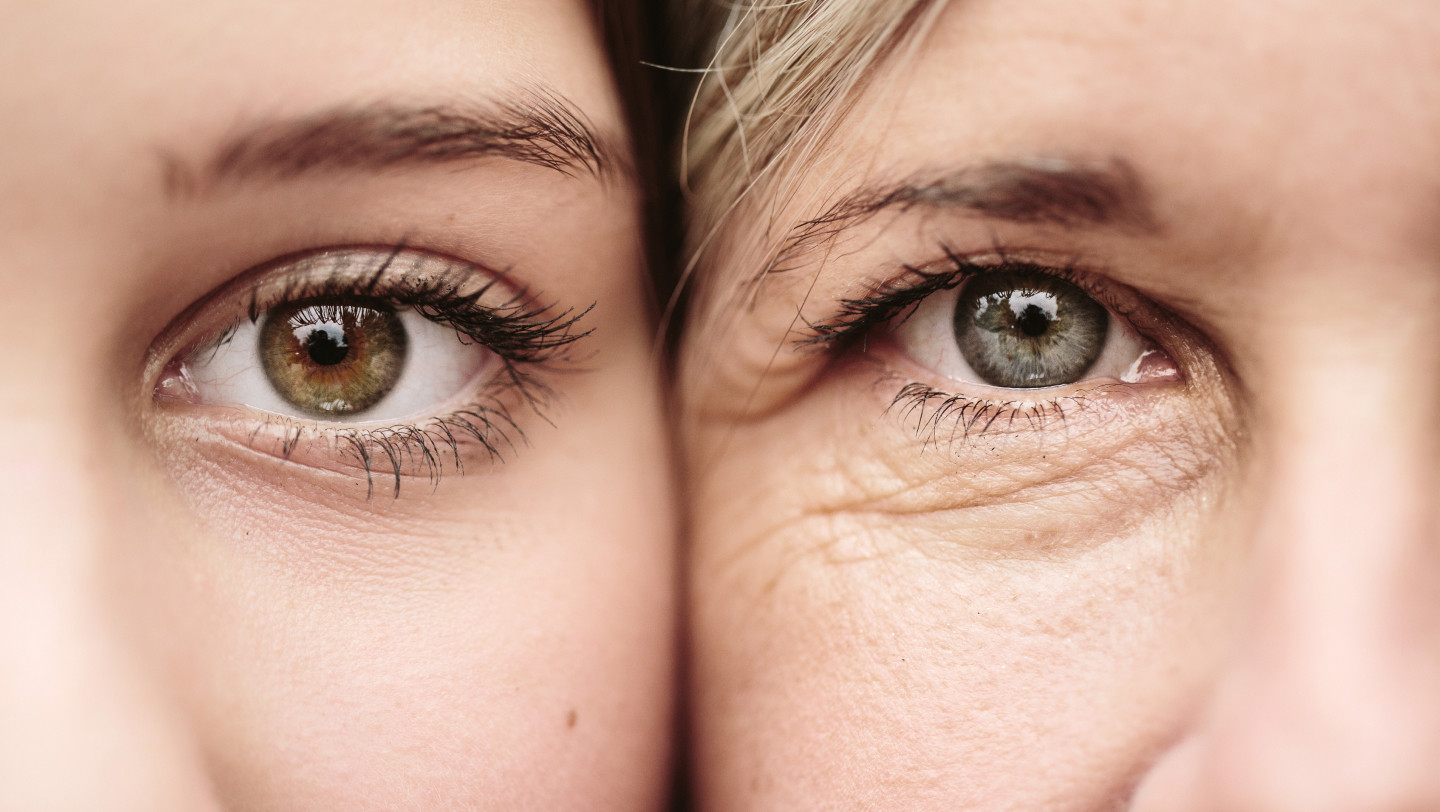 Can you change the way you age?
We used to believe that the way our skin ages is inevitable, but your skin has the ability to restore itself from a cellular level – with nor sken’s breakthrough formula.

Reverse ageing: how skin ages and how nor sken changes everything

Growing older is a natural and inevitable part of life – and for many, the ideal is doing it with grace and vitality. We want to feel our best in every stage of life, and there's no shame in admitting we want to look our best along the way.

The quest to look younger is age-old. Cosmetics and beauty rituals to maintain youth have been used since Ancient Egypt, and from the popular milk baths of the 1700s to the explosion of the skincare industry in the 1900s to today, we have a plethora of moisturisers, lotions and potions that we can use on the surface of our skin – and for a while, our skin may feel and look better.

But cosmetics only work until the next time we wash, and many skincare products only have a surface effect.

Real change to the appearance of the skin can only come from within, or the dermal layer of the skin.

That can happen in two ways:

The safer and more effective method generally is the latter – products informed by science that safely and efficiently work deep down in the cellular level of the skin, making it both look and feel younger.

And this is just what nor sken restore crt facial cream has been designed to do.

Clinical results have revealed that with its use, skin appears smoother, plumper, clearer, and more hydrated – and it has more bounce. But the real breakthrough is its potential to change the way skin ages – in reverse.

It’s all due to an exclusive scientific process, Cellular Rejuvenation Technology (CRT), and a formula developed over years of cutting-edge research by a team of Swedish scientists. The result is a single-step facial cream that unlocks the skin’s innate ability to restore itself to a healthy and youthful state.

But first, let’s explore how our skin works and how it ages to understand how nor sken makes it possible to reverse ageing. 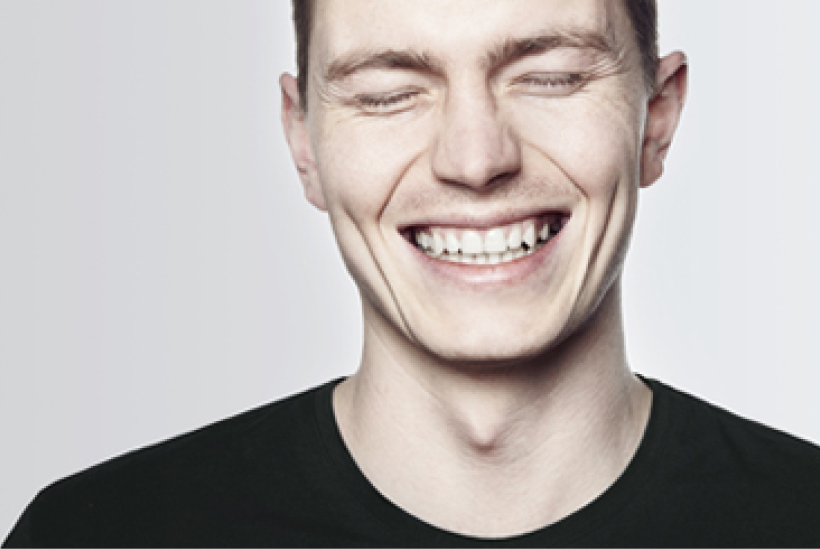 The story of our skin

We may be largely concerned with how our skin looks and feels, but it’s easy to overlook that it is one of the most important organs in the human body. In fact, it’s the largest: The average adult has a total area of about two square metres of skin, weighing about 3.6 kilograms.

Apart from holding the rest of our body together and protecting us from germs and pollutants, it also regulates our body temperature and allows us to touch and interact with the world around us. 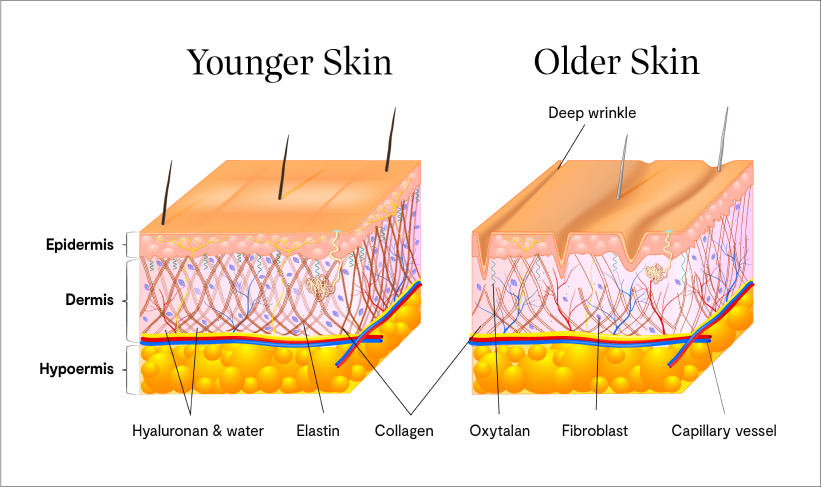 Normal, healthy skin changes in structure with age, and therefore its appearance is impacted. Skin ageing over time is caused by both intrinsic (internal) and extrinsic (external) factors.

Intrinsic ageing is the inevitable physiological process that occurs naturally and is affected by the degenerative effects of free radicals, hormonal shifts and the body's inability to perfectly repair skin damage.

As we age ,the rate of cell production of elastin and collagen slows, affecting the skin’s ability to renew itself and stay plump and smooth. The dermis becomes weaker, thinner, and less elastic, while muscles and fat cells become smaller.

Veins or bones become more visible, and scratches or bruises may take longer to heal. Older skin also has fewer sweat glands and oil glands, so dryness is more common.

Extrinsic ageing, on the other hand, is a result of lifestyle and environmental factors such as sun exposure, air pollution, smoking and poor nutrition. It results in coarse wrinkles, loss of elasticity and skin laxity or “sagging”. Years of sun exposure contribute to deeper lines or pigmentation and age spots.

But there is a solution.

The breakthrough effect is stimulating the production of collagen, elastin and fibronectin, so that they work in synergy to operate the same way younger skin behaves.

The keys to younger skin: collagen, elastin and fibronectin

To understand what keeps skin looking smooth, plump and bouncy – the hallmarks of youth – you need to get to know the three key elements behind these skin qualities: collagen, elastin and fibronectin. All three are vital protein components of skin.

What is collagen?
Collagen gives skin its firmness and hydration. It is the most abundant protein in the body, accounting for about one-third of its total protein composition and can be thought of as the “glue” that holds bones, skin, muscles, tendons, and ligaments together.

What is elastin?
Elastin keeps skin tight and flexible, and is behind its resilience and ability to recoil after it is stretched.

What is fibronectin?
Fibronectin acts as a ‘master organiser’ of cells, gives the skin structure and strength and promotes healing. Elastin and fibronectin operate synergistically with collagen to give the skin its youthful and healthy properties.

The body produces collagen, elastin and fibronectin naturally, and they are in abundance when we are young. However, production of all three starts to decline at about age 25 and decreases even faster with negative lifestyle and environmental factors such as smoking, sugar consumption, stress and ultraviolet rays from sunlight.

One of the most common questions for those pursuing younger looking skin is how to increase collagen and elastin production naturally. Here’s the hard truth: it is not possible to build collagen, elastin and fibronectin in the skin with normal commercial anti-ageing or collagen creams, as the molecules they contain are far too large to penetrate through the epidermis into the dermis where the skin’s bioactive proteins reside.

The only way to effectively regenerate collagen, elastic and fibronectin in the deeper cellular layers of the dermis is by activating or ‘switching on’ the fibroblast cells that produce these skin-building proteins – in the skin’s extracellular matrix… 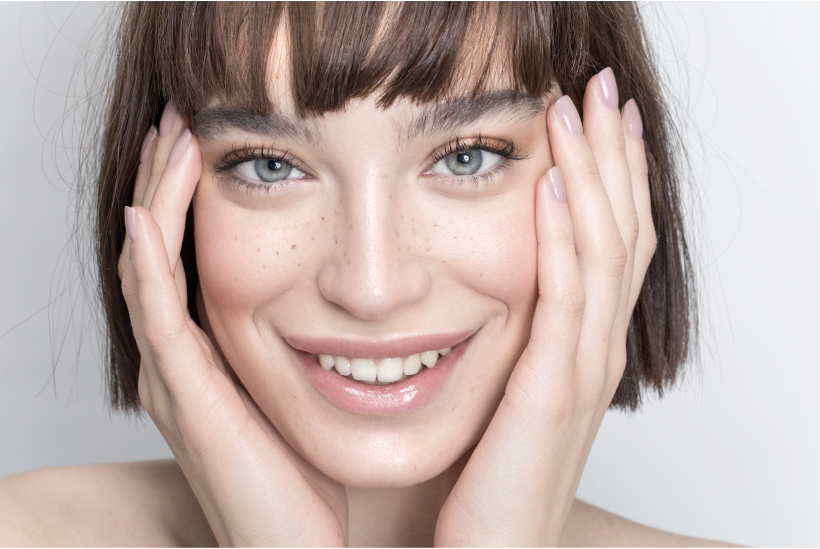 What is the extracellular matrix?

The Extracellular Matrix (ECM) is one of the largest components within the dermal layer of the skin. Consider it an intranet of sorts, where all of the production and healthy maintenance of skin cells occurs. It’s also where the building blocks of the skin – collagen, elastin and fibronectin – do their work.

growth factors. And here’s where things get exciting: according to a study by Dr Adele Sparavigna of Clinical Research and Bioengineering Institute, Milan, “The most advanced anti-ageing treatments are those that regenerate the ECM.

The breakthrough effect of nor sken restore crt facial cream is its ability to stimulate the production of collagen, elastin and fibronectin, so that they work in synergy to operate the same way younger skin behaves, regenerating the ECM in the process.

Fighting skin ageing from within

So it remains that the only way to successfully fight the signs of ageing skin is from within – and this is precisely how nor sken anti-ageing skincare works its ‘magic’.

One of the world’s most renowned and respected dermatologists, Prof Jan Faergemann of Sweden, who is also scientific advisor for nor sken, confirms its status as a game-changer.

The expert in clinical trials shares: "In my professional experience, nor sken restore stands out as something completely different – it is a product that is founded on rigorous clinical science and trials, that lives up to its very significant claims."

"I can say categorically that it has a dramatic effect on the skin, building collagen, elastic and fibronectin synergistically, smoothing out wrinkles and creating a much more firm, hydrated and clear skin."

By switching on the skin’s own healing mechanism, and once again boosting the production of the three key elements behind younger, healthy skin, it truly is possible to change the way our skin ages.

Smarter skincare in one step

Discover our story and what matters to us. 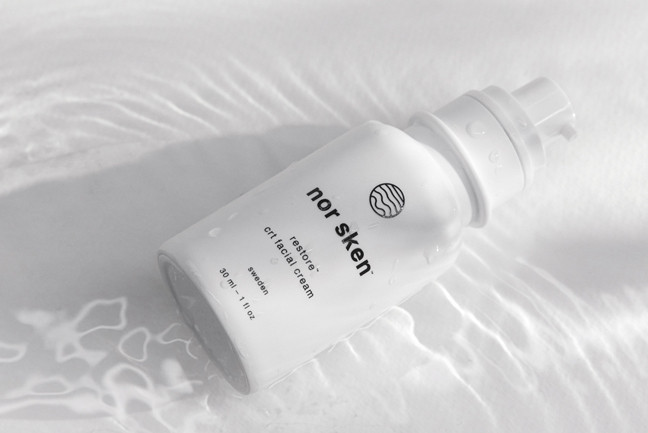